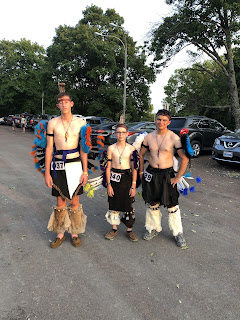 On our way back from Mic-o-say Pow-wow 2021. One of the perennial events of the tribe, usually on one of the first weekends of August.  New braves that have been tapped In summer, boys that have been in for years or adults (newly tapped or seasoned tribesman).  All are welcome to enjoy a weekend full of Mic-o-say activities, education, dance and costume contests and an overall great time. Pow-wow is the first special event that the new braves will get to experience.  It’s a n introduction into Mic-o-say where they learn some dances, costuming, and the beginnings of being a tribesman.  Conclave is usually held in early January and the main difference is that it’s held at an offsite facility.  The braves have had a number of months to get acclimated to things, begin costume work along with the chants/dances.   Feast is the last event of the year where the tribe prepares for the final weeks before summer camp. This year we had a number of new braves join us:  Max Brooks, Christian Woeh
Post a Comment
Read more 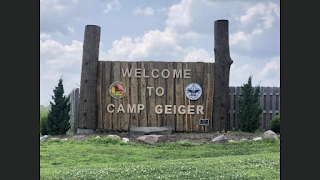 Sun is up....time to eat....merit badge class...eat again...more merit badge classes.....dinner time.....was hot all day....camp almost over.   The end Sorry ladies a land gentleman...all I have for you today. Nah...I can’t do that to you, but like many the end of camp offers a chance to really reflect on how much fun this trip yes, but exhausting at the same time.  We are currently driving the 2 trucks with trailers and a bus full of scouts back to Texas.  This morning as the camp woke the realization that camp is almost over sets in.  The scouts and adults started packing up their footlockers, cots, backpacks, etc.  All of the scouts and adults worked diligently to get everything packed into the trailers and to get ready for the bus.  It is a bit chaotic but we always seem to get it done.  Once packed up the Mic-o-say tribe members met one last time before we left camp.  The scouts all met back at the flag area near the dining hall for closing ceremonies.   Troop 451 was very well r
4 comments
Read more 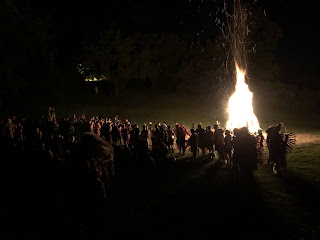 Thursday at Geiger....it’s like Christmas, your birthday, and the last day of school all wrapped up into one.  For those who have been here before, you get it.  If this is your first time, you have no idea of what to expect and that’s part of the magic.  My first year I was a wide-eyed first year Boy Scout dad that had no idea what was coming.  I just kept hearing, just wait until Thursday, just wait.   Ok...wait for what?   It’s not really something that’s easily describable, it’s actually hard to put it into words.  You have to see it with your own eyes and only then can someone truly appreciate it.   Breakfast this morning was served immediately after the flag ceremony where Max Brooks. Landon Pratt, Kaleb Rutherford and Winston Smith represented Troop 451 by raising the Texas flag.  Scrambled eggs and sausage patties with orange juice were the staples of today’s offerings.  Yogurt and cereal were also offered as an alternative or along side.   Mark Lampe, the troop committee was c
Post a Comment
Read more 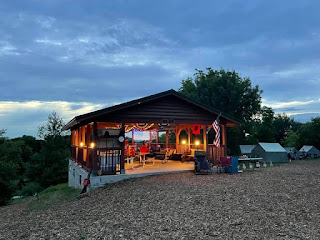 And we escaped the rain once again last night.  Forecast showed rain and storms starting around 2am and going throughout the morning.  Aside from a scattered shower or 2 during the night, the campsite was fairly dry as the troop started to wake up. Around 5:30 or so you will begin to hear rumblings around camp...yawns, a slow shuffle down to the pavilion, or coffee being made.  Grabbing daily temperature checks before we head to the dining hall to stay compliant with the camp Geiger Covid protocols.  The assembly at the flags is at 7:20 am and Troop 451 was there early and ready to eat.  Today’s breakfast was a hearty helping of pancakes, bacon and juice.   As the troop inhaled their pancakes one of our scouts had a head of wet hair, which is odd considering the lack of rain.  One of our scouts, Jonathan Stephens had just returned from the swimming pool where he had completed the camp Geiger 1 mile swim.  Accompanied by Luke Goss each morning for practice to satisfy the “buddy system”.
2 comments
Read more 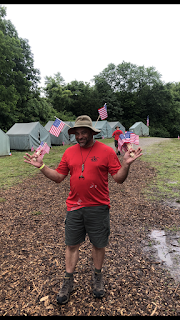 Who doesn’t love a nice surprise?  I mean really...a larger tax return, that extra cookie in the cookie jar, just a warning instead of a ticket for speeding.  All something that we want in our lives.  An example of an unwanted surprise?  Your youngest son informing you of the 6:00am nature hike for his bird study class...at 10:30 the night before.  Obviously not having an alarm clock, I offered my services to wake him up at 5:30.....he said with a forced smile. Rain was in the forecast for all of the evening and luckily the weather men up here in Missouri are just as inept as the ones in Dallas.  No rain at all during the evening but as my alarm clock emitted that joyous sound, the rain started to fall.  A light rain that ended up lasting for a couple of hours...but just enough to get the ground muddy in some spots.  The rain from the previous week is still making its mark here at camp Geiger.   Breakfast was a sausage, egg and cheese biscuit with hash browns.  Cereal with milk....and
1 comment
Read more 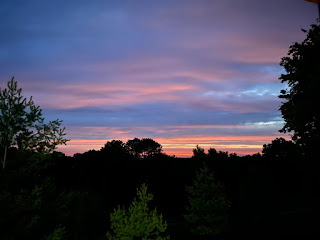 I’d love to tell everyone that I got started on the blog late as I slept in to catch up on my much needed sleep.  But as I lay here wide awake  at 3:37 in the a.m. I am quickly reminded that even adults can be eager with anticipation for the day to begin.  Alas, it is the first day of merit badge classes.   All of the “chaos” of the checkin day is gone. The boys get a dose of structure and planing as they are reminded of what their classes are and where on camp that they need to go to attend those classes.   Breakfast was sausage links and French toast sticks with choice of water or apple juice.  As the scouts inhaled the selections of the day the camp Geiger radio station KAMP played the hits.  A few of the adult leaders left after eating to make our way back to camp as to make sure that we have the site as clean and ready.   The scouts already ultimately responsible for the campsite but a double or triple check never hurts.   The boys have classes 1, 2 and 3 before they break for lun
Post a Comment
Read more 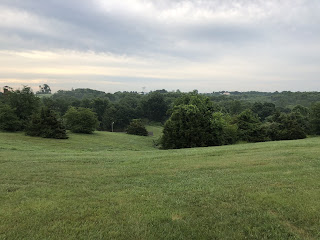 As I lay here awake at 4:45am listening to the musical notes of the cricket that has decided to tent with me I realize that camp is almost here.  The bus en route currently and it currently in Topeka, KS driving north to St Joseph.   This is my first year coming up with the “early crew” as my first years were on the bus, watching Space Jam, eating junk food, giddy with excitement.  The official number of scouts and adult leaders climbed to 51 this year therefore some leave Saturday morning to haul the trailers.  Footlockers, cots, chairs...as much as the trailers could handle that were loaded on Friday night started the trek to Geiger on Saturday morning.  Jessica Harris, Shelly and Jim Koonce, and Mark DiCiaccio in one truck, with Richard Covington, Mark Lampe and myself in the other truck.  Normally there is only 1 trailer taken but we were blessed this year as Mr Covington is part of the Ranger staff this year and that afforded us the opportunity to use the 2nd trailer.   We arrive
Post a Comment
Read more

An Eagle Court of Honor 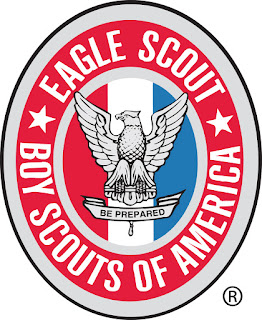 Along with many of the Scouts and Scouters who have been leaders of Troop 451 over the past seven years, I had the honor and the pleasure of participating in Thomas Sorensen's Eagle Court of Honor this afternoon.  During my association with Scouting, which began with attending my older brothers’ Scouting events in the early 1960s, I have seen many Eagle Courts of Honor, including those for each of my older brothers. I never earned the honor of such recognition myself, but since joining Troop 451 in 2012, I have had the honor of participating in many and attending even more. Every Eagle Court of Honor is a moving event and this one was no exception. Although each event has certain parts in common, each one is a unique celebration of the crowning achievement of an admirable Scouting career. No hour-or-so of recognition, no matter how packed with careful pomp and circumstance, can truly be the equal to the years of hard work that are being honored, Thomas’s ceremony, however,
Post a Comment
Read more

By Phillip Pratt Ah Palo Duro.....it’s Troop 451, remember us? If you don’t just think back to last year this same weekend where you decided to bestow a thunderstorm, hail, sand storm upon us. Yeah, you made us leave early and we never forget. But hey, bygones will be bygones. We aren’t a troop to quit or to be pushed around. So we return, chests out and ready. A Friday evening departure from the church took us to a familiar trek up 3E5 to Hwy 287. A rather mundane drive if you will but hey, we gotta get there. A pit stop in Childress to fuel up the vehicles and snacks for the group. On we travel to the Boy Scout Museum in Amarillo, a familiar stop for us as we travel west. The air-conditioned sleep would be our last for the next few nights, at least with cool air. Donuts, coffee, and juice were the samplings of the morning. Once cleaned up, we were off to Palo Duro except we felt the boys needed to see and experience some art so we headed to Cadillac Ranch. Spray paint in
Post a Comment
Read more

By Rob - July 27, 2019
By Philip Pratt As we finished up dinner to the sight of growing thunderstorms we were blessed with some of the most stunning skies New Mexico has to offer. Luckily most went north and south of us but as we prepped for bed the winds came.  Strong gusts took at least 2 tents down (including yours truly) but were quickly repaired. Scattered showers around 1am made for a good nights sleep. 6:30 or so the camp started to awaken...coffee brewing, breakfast prep, and campsite tear down. Breakfast burritos with sausage or chicken, scrambled eggs, peppers/onions with cheese and salsa.  Needing to leave by 9:00 the camp quickly cleaned and packed up in anticipation for our upcoming rafting adventure. Prompt arrival at our meeting spot to load up on a soon to be retired school bus. We were bussed to the drop spot to go over all rules and regulations. Safety protocols were explained with regards to life vests, helmets, paddles, etc. We loaded up into 4 rafts.  Groups of 9,8,4 and 4 were l
Post a Comment
Read more
More posts